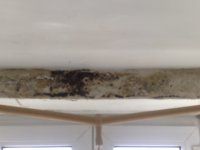 1. The main cause of condensation is naturally the generation of moist warm air by domestic activities. Moist air can come from cooking, bathing, washing and drying clothes as well as paraffin heaters and flueless gas heaters - up to 17 litres of water can be produced daily in some homes . Usually in certain areas such as bathrooms and kitchens where moist, warm air can then spread to cooler parts of the house to condense on cold surfaces.

The effect of moisture generation is further aggravated by the way houses are ventilated - it is theoretically possible to avoid condensation by adequate ventilation. Up to about the late 1960's there was natural ventilation in many homes because of the lack of double glazing, poorly fitting windows and doors, open fire places. Present attitudes have eliminated natural ventilation by the use of double glazing, draught excluders, fitted carpets (preventing air movement up through suspended wooden floorboards) and the removal of open fire places with the introduction of central heating.

Ventilation is only effective if consistent throughout the whole property and if it is done correctly it is the best of all condensation solutions in London.

Further problems are encouraged by poor ventilation where stagnant air pockets are created. There is a real danger of condensation occurring where air is left undisturbed behind furniture and cupboards, often recognised by the appearance of mould growth.

1. Many houses remain unoccupied and unheated throughout the greater part of the day, allowing the fabric of the building to cool down. The moisture producing activities are then concentrated into a relatively short period. This sudden increase in warm air can produce condensation as the air comes into contact with the relatively cold structure which is still warming up.

2. Economic Pressure - dramatic increases in fuel prices force many occupiers to under use heating systems, not heat unused rooms and seal all draughts and reduce ventilation as described previously.

Background heating is often provided by flueless gas and paraffin heaters as a way of trying to heat and save costs. Excessive quantities of moisture are produced from such heaters. For every litre of paraffin burnt over one litre of moisture vaporises into air.

3. Due to changes in building design - many dwelling houses now have central heating systems where open fire places have been removed, thus reducing natural ventilation.

Windows without controllable ventilation became popular and permanent ventilators were not used in rooms without a flue.

Modern changes in roof design, including elimination or overhanging eaves and lowering the pitch, also reduced ventilation and increased the likelihood of condensation.