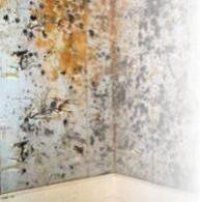 Mould growth will appear on any damp surfaces such as plaster, wallpaper and timber and is associated with condensation problems in many buildings. It is unacceptable because of appearance (growths of various colours - greens, yellows, pinks, black, grey or white), damp odour and fears of health and hygiene considerations. The most common is black mould.

The main requirement for the development and growth of black mould is a source of moisture although food, oxygen and a suitable temperature are also important. It is available water which is critical to mould development and different materials at the same moisture content often have different water availability.

The appearance of black mould growth in buildings often suggests poor standards of property maintenance and/or domestic activities encouraging condensation. Prolonged exposure to mould growth will cause disintegration and disruption of certain painted surfaces. Paper and certain fibre building fabrics may also be softened and deteriorate as some mould species are capable of digesting cellulose.

The use of the Damp Proofing London South lofty anti condensation unit is by far the most cost effective method of eliminating condensation.

The direct cost of a condensation and mould growth problem where only one room has to have mould cleaning or redecorating is at least 250 per year, and in many cases is much more than this.

In addition these direct costs, there is a substantial 'hidden' cost which relates to administration. In the case of Local Authorities and Housing Associations for instance, a Surveyors time is consumed in repeatedly being subjected to the Tenants complaints.

Condensation is an increasingly serious problem in dwelling houses and offices. It affects over 50% of Buildings in the UK.

Accompanying condensation there is an increase in the presence of mould growth and many of the household pollutants. Input ventilation systems are a cost effective way to eradicate condensation and black mould problems.

We at Damp Proofing London South have supplied and installed Input Ventilation Anti-Condensation Units for an ever increasing number of Local Authorities and Housing Associations on a continual basis. Damp Proofing London South have practical expertise second to none and our high quality installation service means you can rely on the effectiveness of the equipment and its installation.

1. The loft space which contains warmer air mixing with air drawn in through eaves.

2. The warmer fresh air is then drawn into the unit where it passes through a special air filter.

3. The filtered air is introduced into the property through the diffuser grille, located centrally at ceiling level in the landing of the property, and is circulated around the property.

4. The fresh air then mixes with the warm air in the property, thus combating the condensation.

5-7. The stagnant air is then expelled through natural leakage points in the property. This also serves to help prevent cold draughts entering the property.

Input ventilation anti condensation units are a successful and cost-effective way to cure condensation. Input ventilation with heat recovery offers you even more benefit because it can save over 80% of heat which would otherwise be wasted by transferring it to the incoming fresh air supply.

Condensation and black mould are a serious hazard to health. The Landlord and Tenant Act 1985 Section 11 puts the onus on all landlords to ensure that their properties are designed and maintained to a standard that prevents conditions arising which can lead to any defect causing damage to the health or personal property of the tenant. Condensation and black mould fall very much into this category.

Under the Act, Landlords also have a Duty of Care to their tenants, to ensure that the premises are constructed and maintained free from defects which might cause personal injury or damage to the property of the occupant.

The solution to condensation and black mould is allowing Damp Proofing London South to arrange black mould removal and to install a Lofty condensation control unit from 880.00 inclusive supplied and fitted!